Tears are in our eyes writing this to you about horse fighting.

When we received the dispatch from our brave horse fighting campaigner Medino “Dino” Yebron on the island of Mindanao in the Philippines, it brought tears to our eyes.

As someone who loves animals, you would have wept too.

NFA and Dino are the only ones fighting this despicable “sport.” We have had some successes – ending literally half of the sickening “festivals” where these cruel fights take place.

But there is more to do, and… the GREAT NEWS is:

Dino’s non-stop and very dangerous work has recently led to a breakthrough in our battle. We are primed to take advantage of it.
The key is the raids.
Dino really needs your help – whatever you’re able to give now – to continue the raids that are putting wicked horse fighting gangsters in prison.
But time is critical. Absolutely critical.

Dino reports that he has a one-shot chance to secure deals with influential decision-makers that will SHUT DOWN horse fighting in certain specific localities!

He must act immediately. 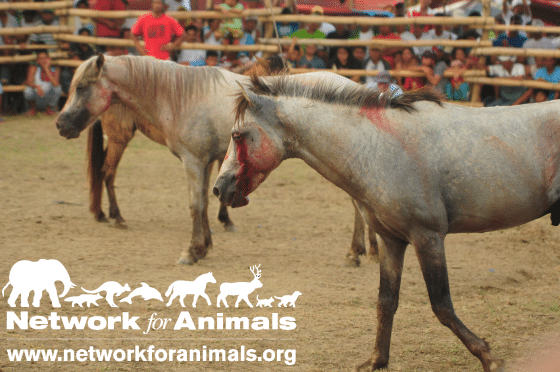 Dino explained how, when supporters like you first rallied to help end horse fights, he never thought sending the participants to jail would lead to a historic chance to create no-horse-fighting zones. “I was wrong,” he wrote…

Two critical raids you helped fund sent “six participants to jail,” Dino reported. “It helped tremendously, and the gangsters are now wary of getting caught. It’s not easy to change a culture that’s been on our islands for 50 years but we’re making great progress.”

As a result of the raids you’ve helped fund, and NFA’s strong presence in Mindanao, a door has opened for Dino to negotiate deals that will ensure no horse fights will ever be allowed in certain locales again!

Please, today, will you help us rush funds to Dino that will create the no-fight zones and save horses?
One of the saddest things of all is the horses that are made to fight are not born mean. Just like in other cruel gambling ventures, such as dog fighting, the innocent horses are trained to fight to the death. For profit. For fun.
Fighters actually sharpen the horses’ teeth for maximum bite damage. Can you imagine the pain!? Wounded animals often bleed from their eyes, like tears. It is deeply unsettling.

This is why horse fighting has been called “one of the most disturbing events of our time.” The grunts of the poor creatures… hooves and razor teeth colliding with flesh… the agonizing cries.

We know this is an entrenched and dangerous battle. Dino’s life has been threatened. He’s regularly intimidated with insults. But he presses on every single day.

Dino and NFA are so grateful for EVERY horse you help save, for EVERY criminal you put away, and for the chance to secure these historic deals.

Please, donate as generously as you possibly can today to help sustain Dino’s vital work to shut down one of the world’s most barbaric animal bloodsports.

The donation you make now may save a terrified mare from getting mounted and raped by the winning stallion. Or a defeated little stallion from a gory death in the arena.

We just must support Dino in his tireless quest.

One beautiful creature. One valiant raid. One no-fight zone at a time. Please, for Dino and the horses. Will you give now, today, and help put an end to horse fighting?

Thank you so much, for remembering the horses. Please do what you can.

P.S. We have provided food for rescued horses, helped construct stalls to keep fighting stallions separated at a special sanctuary, organized and conducted seminars (and planned raids) with the police and politicians. We must continue. The work can be expensive but it’s lifesaving and life changing for the horses. Whatever you can give that feels generous to you now will help Dino in his quest to create no-fight zones and shut down the horrific horse fighting business forever. Thank you.

Tears are in our eyes writing this to you about horse fighting.