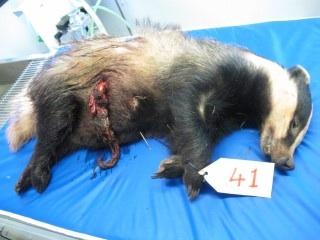 As NFA predicted, Liz Truss chose today to announce the “results” of the 2015 Badger Cull. This is the day the House rises for Christmas recess. Truss and DEFRA hope they can bury this news, and most importantly, avoid any debate on the issue. They think the public will be too busy to notice, and will have forgotten all about this by the time recess is over in January. They are wrong.

It will sadly come as no surprise that Truss has deemed the cull a “success”, and is using this spin to roll out badger culls to other areas.

“Badger control in the south west has been successful and we will enable it to take place over a wide number of areas next year,” she said.

NFA asks: How on earth can the culls be deemed a “success” if bTB rates have been increasing in one of the cull zones?

Liz Truss says badger cull targets had been met in Somerset, Gloucestershire and Dorset in this year’s cull.  1467 badgers were killed in total.

In Gloucestershire, the cull target was 265 to 679. Truss claims 432 badgers were culled.

According to DEFRA’s  Chief Veterinary Officer, (CVO) Nigel Gibbens,  “the results show industry-led badger control can deliver the level of effectiveness required to be confident of achieving disease control benefits.” This is the same stock response he gave after the 2014 Badger Culls.

NFA also note that this year, the CVO “reiterated the importance of monitoring the control licences to ensure compliance with licence conditions and Best Practice Guides and to keep a check on the humaneness of controlled shooting”. Why then, out of 1,467 culled badgers, were only 20 examined post-mortem to assess the humaneness of the culling techniques? It is shocking that DEFRA’s Chief Veterinary Officer would be satisfied that levels of humaneness were being met by examining only 20 badgers. Is he genuinely able to live with this?

NFA recently brought you the shocking story that none of the badgers culled in 2015 were tested for bTB. The very disease they are being culled for carrying. The disease DEFRA say badgers are giving to cattle, which is destroying the lives of farmers. This seemed very odd to all the rationally minded people who oppose the cull, many of whom are eminent independent scientists and veterinarians,  not paid by DEFRA. Surely the government would want every badger tested, so they could prove to the public once and for all just how much badgers are the enemy. It appears that DEFRA and the NFU think they can keep claiming anecdotal evidence as fact, and hope the public won’t notice.

This lack of regard for hard evidence explains why DEFRA  has hailed the 2015 cull a “success”, and confirmed their commitment to roll-outs, despite the fact that in Somerset there has been a 7.75% increase of bTB in cattle this year. DEFRA published these facts on its site. How can they deem the Badger Cull a success if bTB is on the rise in a culling zone which has been part of the Badger Cull for the past 3 years?

The real solutions to the bTB crisis in cattle

NFA acknowledge that DEFRA is realising the importance of increased biosecurity measures and cattle movement controls when it comes to tackling the bTB crisis in cattle. Many farmers we have spoken to have long thought that DEFRA needs to focus on this. Just a few months ago, we brought you the shocking story that a so-called “closed herd” had included calves that had visited agricultural shows, where cattle to cattle bTB transmission is highly likely. NFA believe that DEFRA’s commitment to these new stricter measures will stop these kind of incidents tfrom happening. This will help reduce bTB in cattle. Badger culling won’t.

One part of DEFRA’s 25 year bTB strategy is being ignored though, and it could be argued that it is the most important part: Cattle Vaccination. NFA was skeptical when Farming Minister George Eustice recently made reference to worldwide shortages of the BCG vaccine,  in the same breath as  justifying a 2016 badger cull, and roll outs. NFA is in no doubt that there is a worldwide shortage of the vaccine, and those vaccines should go to humans in need. However we question how DEFRA, who has spent millions of tax payer’s money on cattle vaccination and field test projects, has not foreseen these shortages coming. If a usable bTB vaccine for cattle is worth spending millions of pounds of public money to research, why is DEFRA not having its own vaccines produced, for cattle and badgers? It could be argued that DEFRA is using the BCG shortage as a reason to disregard the idea of cattle vaccination once again. The BCG shortage also means that the four year badger vaccination trials in Wales will not be able to continue.

It is interesting to note that Wales has managed to deal with its bTB crisis without badger culling. Liz Truss was asked at recent  EFRA Select Committee meeting why England is not looking to Wales more as an example of how to deal with bTB without culling. Now, due to the vaccine shortage we are only recently hearing about,  Wales won’t be able to provide the scientific results of their 4 year vaccination trials. Is it in DEFRA’s plan to roll-out culls to Wales too?  NFU President, Meurig Raymond, who is a farmer in Pembrokeshire, Wales, would certainly be pleased about that, and we know that DEFRA is keen to appease the NFU at every turn.

“ must establish a thorough evidence base for underpinning policy formulation and communicate it in a fully transparent manner to set out clearly the reasons for the policy decisions it takes.“

NFA is in agreement with the EFRA Select Committee, and does not believe that the results DEFRA has announced today reflect their wishes. Nor can DEFRA use these results to justify further culls, and further roll-outs.