BOTSWANA PRESIDENT CALLS IT A HOAX, BUT ELEPHANT POACHING IS INCREASING

By Andrea Matthee The Botswana government is in denial about the extent of its country’s elephant poaching problem. When presented with scientific proof of an increase in poaching, Botswana president, Mokgweetsi Masisi, described the findings as the “biggest hoax of the 21st Century.” This despite the findings being reviewed by a number of international elephant […]

Since 2013, Namibia’s wild horse population has plummeted from 286 to just 77 horses. In 2013 alone, hyenas killed a hundred horses, fifty of them foals. The urgency of the matter surfaced again in 2018 when the Namibia Wild Horses Foundation (NWHF) sought government help to protect five foals born in May that year. Months […]

Botswana wants to make this… really By Andrea Matthee Conservationists are deeply concerned that the government of Botswana is considering lifting the ban on elephant hunting and turning culled animals into pet food. A government committee report presented to the Botswana president, argued that hunting would promote tourism, whilst controlling the elephant population. Frans Van […]

Orphaned rhino highlights the tragedy of the trade in rhino horn

A two-and-a-half month old rhino calf was the only survivor of a recent rhino killing spree in South Africa. The terrified calf was found cowering next to its butchered mother by a team of conservationists who were on a mission to remove the horns of adult rhinos in an effort to prevent them being killed […]

57 rhinos poached for their horns in Namibia

The Namibian Minister of the Environment and Tourism has revealed that 57 rhinos were poached in Namibia in 2018. Minister Pohamba Shifeta said 120 suspected poachers were arrested and called for harsher punishments for those found guilty of poaching. David Barritt, chief campaigner for Network for Animals, welcomed the minister’s decision to seek more severe […]

In South Africa, NFA was alerted that the Foundation for Conservation of Coastal Bird’s (SANCCOB) had a crisis on their hands in regard to the abandonment of 2,000 flamingo chicks at Kamfers Dam outside Kimberley. This occurred after a water shortage at the dam which subsequently meant the adult flamingos could not feed themselves or […]

Network for Animals (NFA) has designed and built modern kennels for anti-poaching dogs in South Africa’s Addo elephant park. Anti-poaching dogs track criminals who target rhinos for their horns and elephants for their tusks in the huge national park. They play a vital role in protecting animals at a time when poaching is at crisis […]

The canine wounds that only one man can heal. 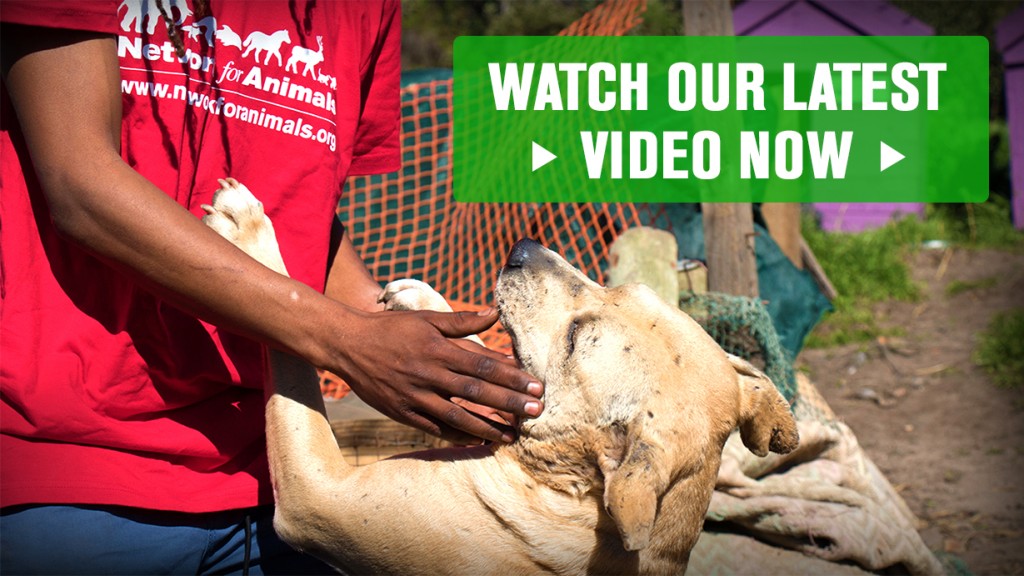 I want to tell you about a desperate situation in Hangberg, in South Africa, where one man fights to care for street dogs in a horribly poor community of 28,000 people, where dogs’ lives are nasty, brutish and short. Shaygum Newman is a lone figure trying to help… He rescues and treats as many dogs […]

Named after legendary animal welfare pioneer Brian Davies, The Brian Davies Award is a new annual award made to an animal welfare organisation that has managed to significantly help animals, in difficult and challenging circumstances. It carries a $10,000.00 prize. Finalists came from Greece, Uruguay and South Africa. Network for Animals (NFA) organised the awards […]

While Botswana’s elephant population has been stable at around 130 000 animals for the past 15 years, conservationists have expressed serious concerns that poaching syndicates that have decimated elephant populations in East and Central Africa are moving south, making Botswana their next target. This follows the discovery in September of the bodies of 87 elephants, […]

Elephants in the snow

Although snowfalls are not uncommon in South Africa, particularly in high-lying areas, the sight of savanna animals such as elephants, giraffes and rhinos in the snow, is almost unheard of. That probably explains why a number of photographs of iconic African animals taken during a cold snap in South Africa went viral. The photographs were […]

Sniffer dogs prove their worth in rhino poaching crisis

The Kruger National Park – the oldest of South Africa’s world-renowned national parks and wilderness areas – is starting to win the war against rhino poaching, thanks in part to the sniffer dogs that Network for Animals helps to feed and care for. According to a report in South Africa’s respected Business Day newspaper, the […]