Giving Tuesday: The Truck of Death 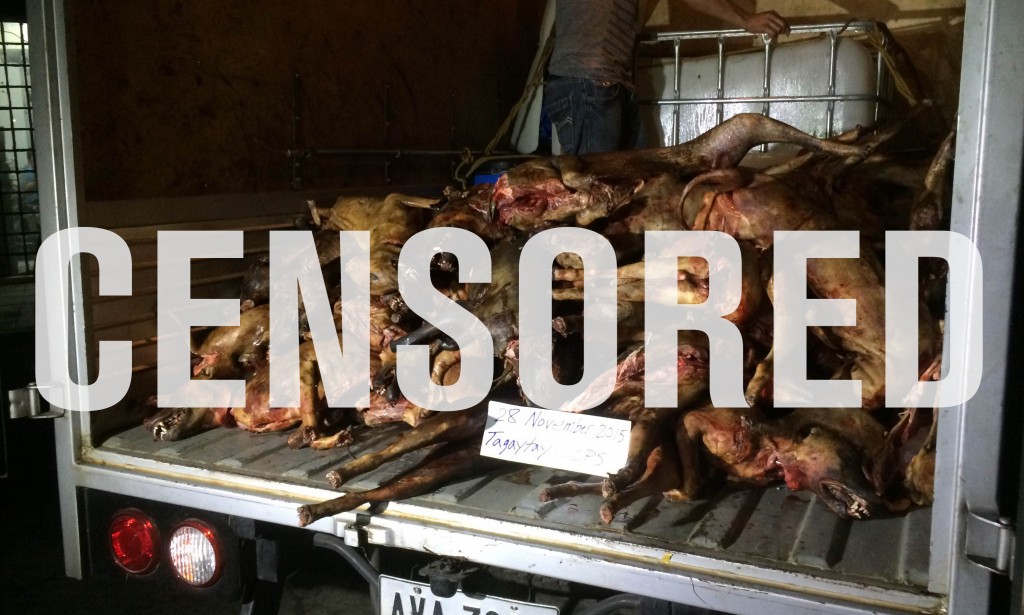 Our surveillance work has led to yet another successful dog meat trade raid in the Philippines.  Our dedicated team were monitoring a suspect for some time and believed him to be one of the key players in the dog meat industry. Their suspicions were correct. What they discovered in his truck was truly horrifying: the frozen carcasses of 78 dogs.

All 78 dogs you see in the shocking picture above were once someone’s beloved pets, or strays deserving of love. From the moment they were stolen, they never experienced love or affection again. The story doesn’t change: Mouths bound with twine that cuts the skin. Packed into tiny cages with no water, in unbearable heat. They would have gasped for air whilst they journeyed to their deaths at the primitive slaughterhouse, terrified about what was happening to them.  The lucky ones would have died on the way there. The suffering these dogs endure when murdered is beyond human comprehension.

This sick trade must end, and NFA works closely with law enforcement in the Philippines to make sure arrests are made, and perpetrators face the consequences of their actions. On 28 November, the suspect and his accomplice tried to get away but thankfully we and the police were able to stop them just in time.

“The car almost escaped. Thankfully one of our men was able to spot the vehicle and we informed the police immediately. There was traffic ahead so the police were able to catch up with them. The police asked the driver to open the back of the truck but at first they said they lost the key.  After a few minutes they agreed to open the lock. The smell of burnt dog meat immediately emitted…”

TV crews were soon on the scene to film events, and interview our team leader, but his life, and the lives of our other team members fighting the dog-meat trade in the Philippines are in danger. The men arrested in our recent raid are powerful and dangerous individuals, as are many who make money out of the brutal dog meat trade. They will stop anyone who gets in their way, and our team is getting in their way again and again.  For this reason, our team member had to cover his head during filming, and insist his voice was disguised, and identity kept secret. “We fear for our lives”, said one of our other brave team members.

That fear does not and will not stop NFA’s fight to end the dog meat trade in the Philippines. Our team’s dedication and bravery in the face of danger will continue until every dog is safe. But we can’t do it without your support. Today, on Giving Tuesday, please give what you can to help us fight these vile dog meat traders.

Think of how loving and affectionate dogs are, how frightened they can become at a trip to the vet, or from a loud noises like a firework. They look to their owners for comfort and reassurance. Now imagine a dog  being stolen from that loving owner. Tied up, packed tightly into a cage and left gasping for air. Dehydrated, in pain, and wondering why their owner isn’t there to help, as one-by-one the petrified dogs surrounding them are murdered. This is why we are fighting to end the dog meat trade. Please help us: