NFA representative, Claire Attwood, will today meet the South African government committee formed to consider a legal trade in rhino horn, to argue against their proposals.

Attwood said she will demonstrate that a legal trade would have a devastating impact on South Africa’s rhino population and lead to an increase in the already distressing rhino poaching epidemic. The South African government is refusing to reveal the latest statistics, but best estimates are that more than three rhino are being slaughtered in the country every day to feed the market in Vietnam. Some Vietnamese people wrongly believe that rhino horn is a magical cure for everything from hangovers to cancer.

The South African government is considering asking CITES (the Convention on International Trade in Endangered Species of Wild Fauna and Flora) to lift the existing ban on the trade in rhino horn, in place since 1977, to enable it to sell its stockpile of 22 tons of rhino horn. The stockpile represents at least 25 000 dead rhinos. A lifting of the ban would also allow South Africa’s wildlife ranchers to harvest rhino horn and sell it for massive profits.

There are very convincing arguments against the establishment of a legal trade in rhino horn, and NFA will present these to a Committee of Inquiry that has been set up by South Africa’s Department of Environmental Affairs to investigate the feasibility of the trade in rhino horn.

“History teaches us a legal trade would not stop poaching, it would make it worse,” said Attwood. “South Africa would not be able to adequately monitor and control a legal trade and it would become easier for criminal gangs to launder illegal horn through legal channels.”

“This strategy has been tried before with elephant ivory and it did not work.  African governments sold their ivory stockpiles in the hope that flooding the market would reduce demand for ivory, but in fact the opposite happened and poaching continued unabated.”

Network For Animals will recommend that, instead of lobbying for the opening of a trade in rhino horn, the South African government should increase efforts to prevent poaching; embark on a concerted effort to educate user nations, with the purpose of reducing demand for rhino horn; and apply diplomatic pressure on countries that do not enforce the ban on the rhino horn trade.

During Network For Animals’ presentation, we will also point out that any plan to create a legal trade would be ethically wrong and out of step with South African environmental legislation:

“South Africa’s constitution requires that the country’s natural resources are protected for the benefit of future generations. A legal trade will only result in the very real prospect of rhinos becoming extinct in the wild.”

The full text of our submitted report can be reviewed here. 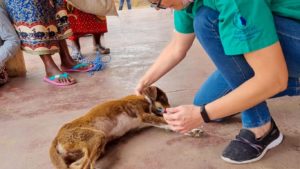 Recently, the Network for Animals team traveled to the coastal village of Xai-Xai, in the south of Mozambique, to undertake a spay and neuter drive 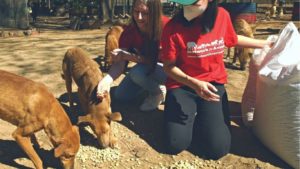 In June, we shared with you the plight of Harare’s Friend Animal Foundation (FAF), the safe haven for neglected and abused animals in the impoverished