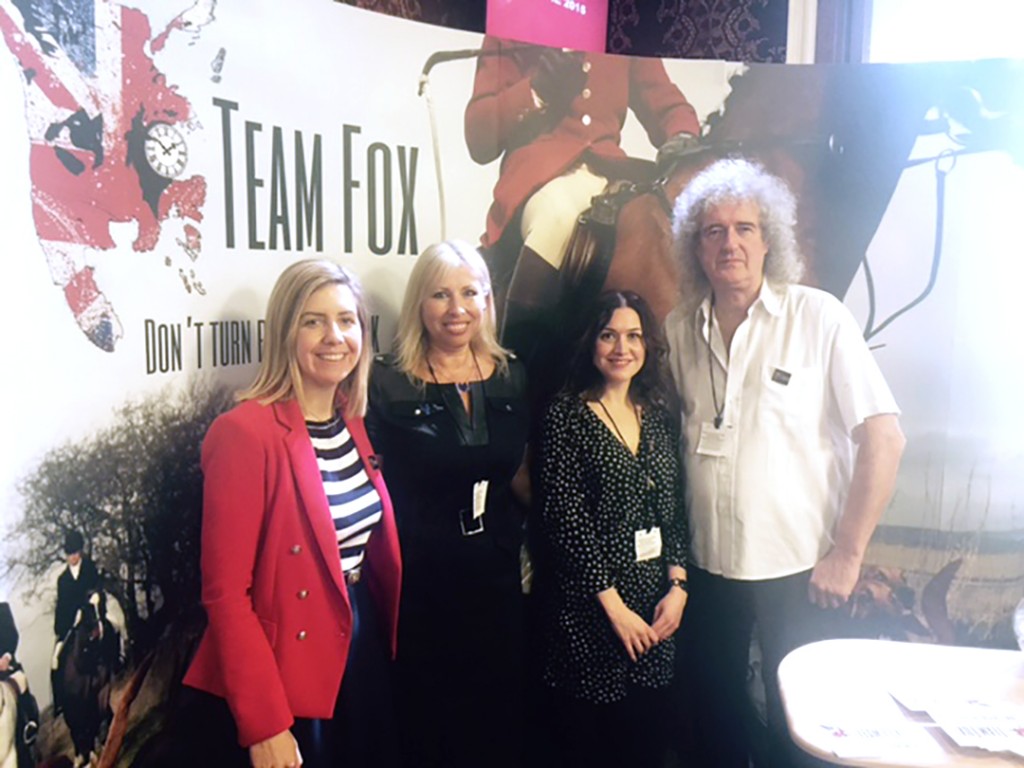 Network for Animals’ Kirsten Anderson attended the Team Fox Parliamentary briefing in the House of Commons today, which was led by Brian May. Team Fox is a coalition of animal welfare groups, including Network for Animals, who have come together to fight to keep the hunting ban in place, protecting foxes, hare, deer and mink from unnecessary cruelty in the name of sport.

During the general election, David Cameron pledged to put the repeal of the Hunting Act to a free vote in the House of Commons, which if successful, would set back animal welfare in the UK by more than a decade.

As our supporters will be aware, Network for Animals has recently organised a petition to Angus Robertson of the SNP to urge his party to vote against the repeal when the time comes. They are on record as being against fox hunting, and are a party committed to animal welfare. Now that they have 56 MPs in Westminster, their votes could potentially make all the difference and quash David Cameron’s repeal hopes. However, as we reported recently after our meeting with Tasmina Ahmed Sheikh, MP, the SNP are in a difficult situation at the moment and may not get the opportunity to vote at all, if David Cameron brings in English Votes for English Laws (EVEL).

Calum Kerr, SNP MP kindly spoke with NFA today in Westminster and reiterated the difficult position his party find themselves in. It’s therefore imperative that we continue to lobby David Cameron, who needs to release his proposed new legislation so the SNP is able to comment on it. Moreover, we must try and change the minds of those in the Conservative party who plan to vote yes to the repeal, as well as convince those who are as yet undecided.

Historically, the Conservative party has been seen to be a pro-hunting party, and it was for this reason that Team Fox invited Conservative MPs to today’s briefing, in the hope that their minds could be changed by talking to us. Attendees were also shown footage of fox cubs recently found in a barn near where hounds were kept. These poor cubs were clearly being held for hunting purposes and thankfully were later rescued by police, however there are thought to be many more incidents like this occurring in the UK today. Given that the pro-hunting lobby tries to argue that fox hunting is just a way to keep fox numbers down, this kind of discovery, just like the existence of artificial earths, completely discredits their arguments and shows fox hunting for what it is: a barbaric bloodsport that has no place in a civilised society.

Andrea Jenkyns is one Conservative MP who is very much a supporter of Team Fox, and was in attendance along with Henry Smith, MP, who is one of the new co-chairs for the All Parliamentary Group for Animal Welfare (APGAW). Sir Roger Gale, another Conservative MP who is staunchly anti-hunting and indeed a patron of Blue Fox, lent his support too.

Brian May said how optimistic he felt about our fight against the repeal, now that there were Conservative MPs who were willing to speak out for what they believe in, rather than tow a party line, and Andrea Jenkyns herself said she wanted to fight the repeal “every step of the way”.

Nadine Dorries, formerly a pro hunting MP, left today’s briefing as an MP with an anti-hunting stance, and wearing a Blue Fox badge to prove it. It is believed that there are many more Conservative MPs who are now anti-hunting, and we need them to speak out and pledge to do the right thing when the time comes to vote.

Network for Animal supporters should continue to politely lobby Conservative MPs and encourage them to do the right thing on voting day. If enough of them vote with their conscience and integrity, it will put paid to David Cameron’s attempts to undo the most important piece of animal welfare legislation that has been put into place in recent history.