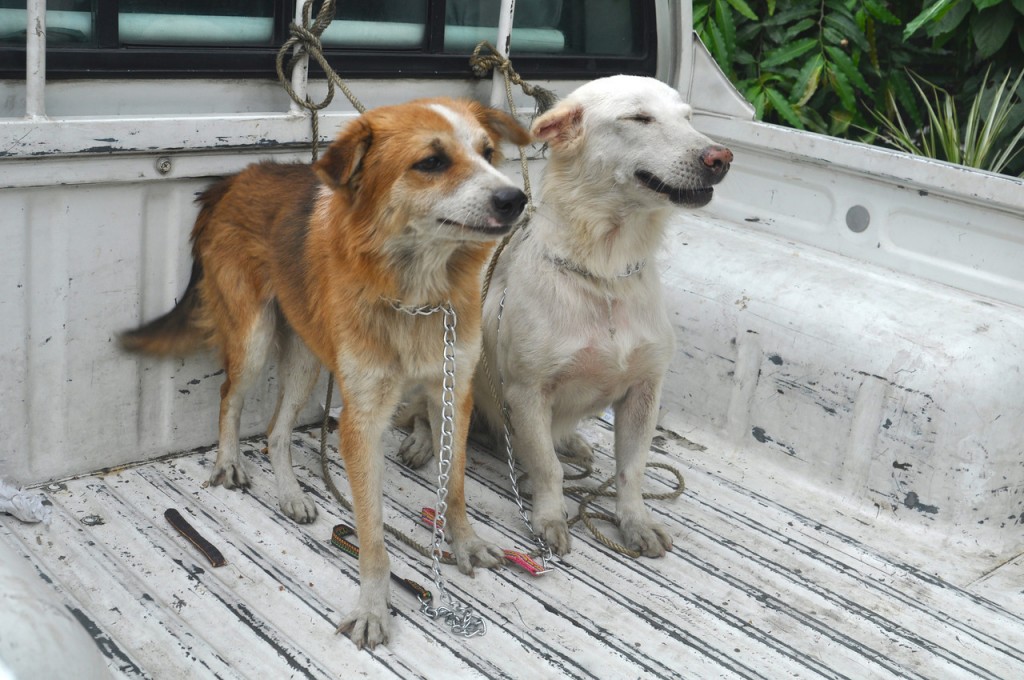 Network for Animals has been fighting the dog meat trade, an illegal underground industry that tortures hundreds of thousands of dogs, since 1998.

The dog meat trade, as the name suggests, is a horrific industry that slaughters hundreds of thousands of dogs every year. Many of the dogs involved are pets, stolen off the streets by traders who bind the dogs’ muzzles and tie their front legs behind their backs. Dogs are killed violently, and suffer unbearable pain. The dogs’ eventual destination, is the human plate: They will be eaten.

However, thanks to the efforts of our brave team in the Philippines and together with your support, NFA has achieved positive change in 2015. One of our victories was in May, when, with the support of a local mayor, we shut down a dog slaughter operation in a rubbish dump in Padre Garcia. We additionally rescued 14 dogs from another backstreet Philippines slaughterhouse.

In September we reported that members of Network for Animals’ Philippine anti-dog meat team assisted the prosecution of three dog meat traders in collaboration with the Calatagan police force, 100 miles south of Manila.

As we approached the winter season, a season where dog meat supply and demand in bars and restaurants typically increases, our tactics changed. The increased use of cell-phones and ‘mobile slaughterhouses’ by dog meat traders, has made ‘live raids’ increasingly difficult. As such, we have formed alliances with local police, and the Philippine National Meat Inspection Service, to perform raids on restaurants suspected of serving dog meat, and suspected suppliers in transit. Since October we have attempted more than 20 raids on restaurants, eighteen of them successful, the rest suspiciously ‘closed’ on our arrival…

In November we told you about the 168kg of dog meat that NFA confiscated during a restaurant raid. That same month the work of NFA was referenced during a debate in the British Parliament on the dog meat trade, and in early December the stop, search and dog meat seizure of what we have come to know as the ‘truck of death’.

A key action in December has been the raiding of two Comiles restaurants, a small and popular chain, known for serving dog meat in the Philippines. As suspected, NFA found dog food on the menu. With the assistance of the police and the National Meat Inspection Service we are now prosecuting those involved, trialing the use of the Philippine Meat Inspection Code. This law carries severe penalties, and our hope is that a successful prosecution will lead to those involved in the dog meat trade sincerely reconsidering their involvement.

Our work on the dog meat trade in 2015 builds on our efforts to educate young people around the cruelty and suffering of the illegal dog meat trade. And, as our network of informants grows and convictions increase, we are stepping up the pressure on the Philippine government to increase funding of those bodies supporting Network for Animals’ pursuit of those involved in this cruel trade.

We thank you, our committed supporters for facilitating the positive changes that the dogs of the Philippines so desperately need. However, there is more to be done. Please support our work as we move forward in 2016 to eliminate this inhumane industry.