The noose of death dug more than an inch into Hagan’s flesh. 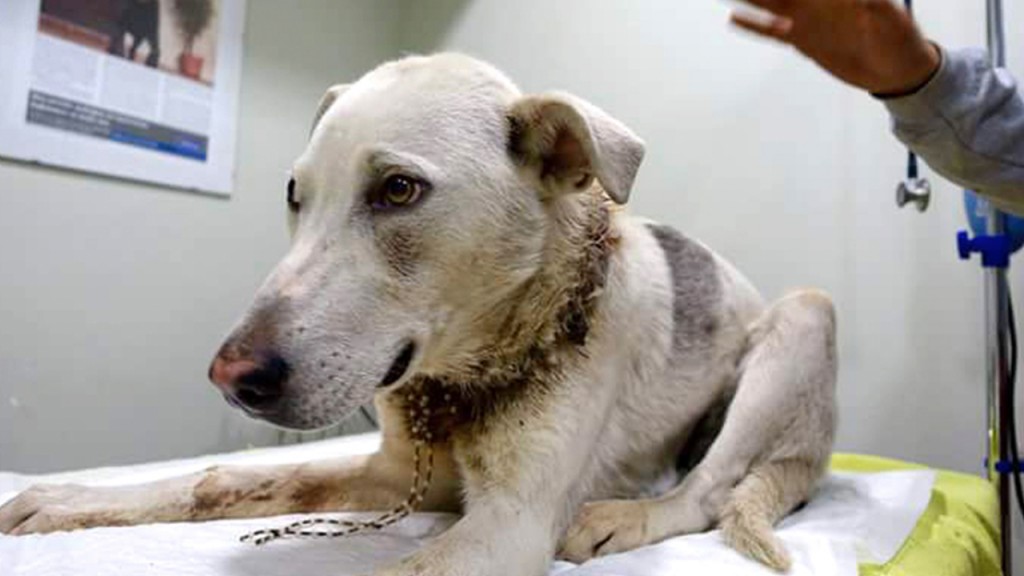 When he was a puppy Hagan was the plaything of children living in a gypsy camp near Athens in Greece. They put a plastic chain around his neck, tied him up and then forgot about him…

Somehow Hagan escaped. With the chain still round his neck, he scavenged a living.

The kids saw him occasionally, but he wouldn’t go near them. So, they left him, throwing him scraps of food from time to time. He got bigger, the chain dug deeper, turning into a noose of death that caused a painful, open, oozing wound, slowly choking Hagan’s life from him.

A volunteer from our partner, Ghost Dogs of Aspropyrgos, found him, weak and exhausted just days from death.

Hagan was about a year old when he was rescued and the chain was finally removed from around his neck. It had dug more than an inch into his flesh, which was raw and bloody.

Hagan was rushed to the vet and with financial assistance from Network for Animals, he underwent a painstaking eight-hour-emergency-operation that saved his life. He’s still at the vet and needs more treatment, but he’s going to be fine.

We wish we could tell you that Hagan is an isolated case, but the truth is that dogs in Greece are in terrible trouble. The economic crisis in the country is getting worse and more and more dogs are being abandoned by desperate owners who can barely feed themselves. Sometimes they give their children a puppy as a cheap present and then abandon it when it becomes expensive to feed. That’s probably what happened to Hagan.

Because the situation is so bad, we’ve stepped up our efforts to help, but we need to do so much more. There are hundreds upon hundreds of dogs in distress in this one area alone.

Our volunteers tour the area finding and feeding the dogs, who are so grateful that they appear from nowhere like ghosts, wagging their tails whenever they see our cars.

We are their sole hope and it’s only your support that allows us to provide the food and emergency medical attention they need. Please, please donate today.

A small victory for NFA but it means the WHOLE WORLD to one poor kitty!

https://www.youtube.com/watch?v=slGlmXTc9Rw&feature=youtu.be You may remember Yupi, a little ginger cat we told you about who we found lying in a gutter in Manila. Poor Yupi was

In a heart-warming act of animal charity, a New Zealand South Island city, Dunedin, has closed one of its coastal roads to allow a mother

Man’s Best Friend Is Saving Lives – No Matter The Weather!

Meet Flo – an energetic and confident four-year-old Border Collie who has a knack for saving lives. Flo is a member of Mountain Rescue Search