What Impact Will Brexit Have On Animal Welfare? 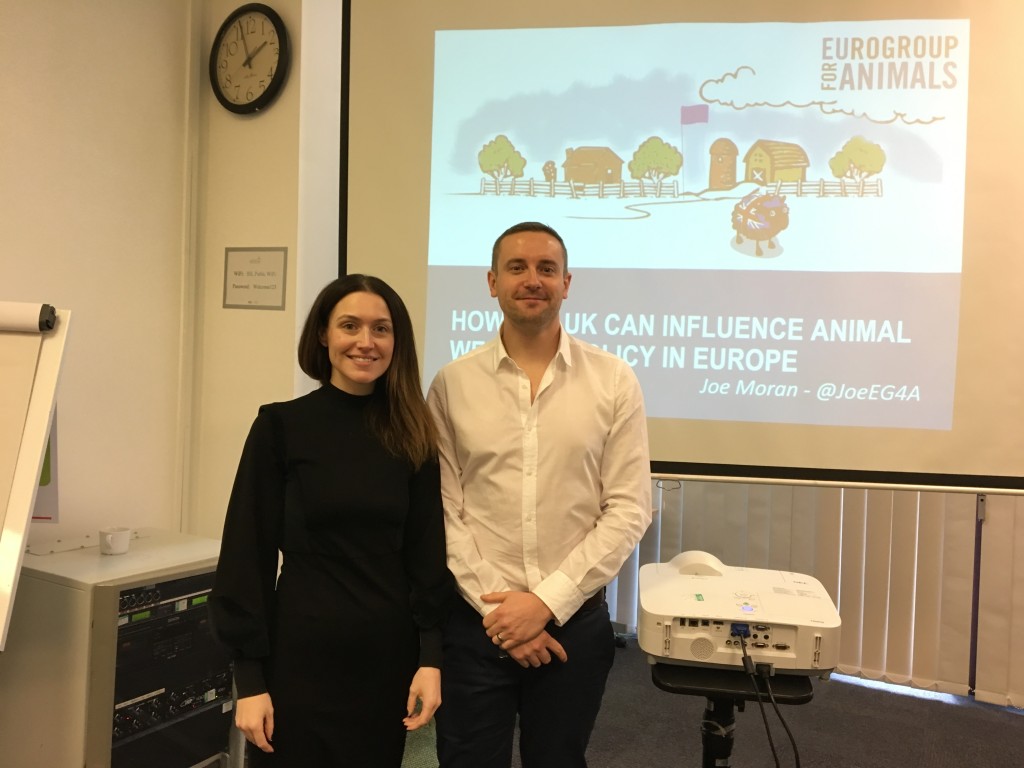 Network for Animals’ Paul Herring and Kirsten Anderson today joined key animal welfare groups including HSI, PETA and the RSPCA in London, to understand and debate the impact that Brexit will have on laws surrounding the treatment of animals in the UK.

As the press widely report, little is currently known about the route to Brexit being taken by the UK government. For better or worse, the Conservative party are refusing to share information on their plans. This is understandably of great concern to much of the UK population, and the billions of individuals with whom the UK wish to trade.

As a member of the European Union, the United Kingdom’s laws are mostly trumped by European law. This means that where pre-EU British animal welfare standards may have fallen short of standards within Europe, today the UK not only have to meet EU standards, but can and will be held accountable in the European Courts of Justice when those standards aren’t met. This obligation is very real and has the potential to generate daily fines of millions of pounds for non-adherence.

The power of agreement on animal welfare standards within the EU resonates not only within European Union countries, but also far beyond. Non-EU countries wishing to trade within the EU are often obligated to raise their standards of animal welfare, but as a non-EU country, there will of course be the option for the UK government to seek trade with countries that have lower welfare standards. It is our sincere hope that the UK government does not pursue this route.

So how will the UK leave the EU and what kind of trade agreements will it form? We are in uncharted territory, with many possible options on the table including the Swiss, Turkish and Canadian models. The most likely route however seems to be the UK negotiating to join the European Free Trade Agreement (EFTA). Put simply, this is an agreement of standards which, when met, allow non-EU nations to trade with EU nations. The EU and EFTA jointly form the European Economic Area (EEA).

Taking this route would see the UK take on most current EU laws as the UK’s ‘new’ laws, but without the overarching power of the European Courts of Justice overseeing the adherence of these laws. Taking this route would give the UK a degree of freedom to pick-and-chose the laws it grandfathers from the EU, and those it decides to re-write. From the point the UK government triggers ‘Article 50’, it will have two years to negotiate trade agreements, to decide which laws to transfer to the UK, and to write its new laws. Key areas of law that are unlikely to be directly transferred from EU law include but are not necessarily limited to:

The re-writing of these laws will leave wide scope for either the improvement, or the worsening of animal welfare in the UK. It is up to the pressure of the public and lobbying groups on both sides of the animal welfare movement which direction these new laws take. And beyond this, we may wish to use Brexit as an opportunity to make further improvements to UK animal welfare law and implementation including, but absolutely not limited to:

– The improvement of protection for marine creatures around the UK, particularly Scotland.
– A retained seat at the CITES table, but rather than as a member of the EU, the UK take advantage of EU independence to vote in favour of the outright ban of international transport of hunting trophies and increased Appendix protection of elephants.
– Banning the live exports of farm animals for international slaughter.
– Improvements to funding for the prosecution of international wildlife crime.

Perhaps most importantly, we should the consider the maintainence of Article 13 of the Treaty of the Functioning of the European Union a priority. This important statement recognises the sentience of animals and the need for animal welfare to be taken into account alongside economic gain when implementing laws, and would be a great loss to animal welfare laws on the post-Brexit United Kingdom.

The key goal at this point for animal lovers and lobbying groups, is that current animal welfare standards should not be diluted after Brexit. This period of change should be used to improve the standards of animal welfare. There will of course be pressures from some in farming and industry lobbying groups to lower welfare standards, increase industrialisation, and overlook current requirements in favour of profit and the ability to trade. It is vital that the UK is able to fight these voices and stand up for animals as it heads towards Brexit.

Good News from Jordan for Pepe the Dog

Good News from Jordan for Pepe the Street Dog https://www.youtube.com/watch?v=jvBxhGsOS4I Pepe is a Jordanian street dog who was dragged behind a car as a sick

Signs of Hope for Pepe the Dog from Jordan

Signs of Hope for Pepe the Dog from Jordan https://www.youtube.com/watch?v=-tG2EINUT1E Last week, we told you about Pepe, the dog that was dragged behind a car

The sweet story of Jojo, the dog who adopted a litter of adorable opossum joeys, is warming hearts countrywide. The joeys are lucky to be

Joe Biden will be the next USA president – and his beloved rescued pet pooch Major, couldn’t be prouder of his owner! Not just did