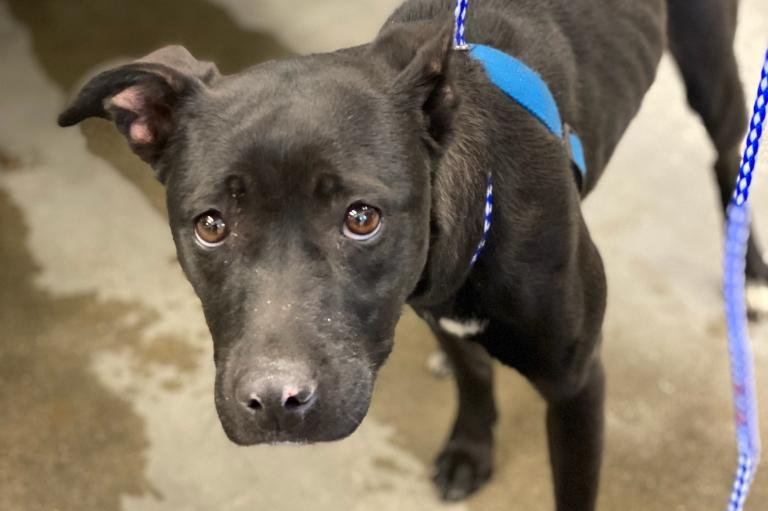 Image by The Nebraska Humane Society

The incredible journey of a brave dog named Ivy is warming hearts across the globe. Now the search continues to find Ivy’s missing brother, Calypso.

Scared, dirty, and scrawny, Ivy was found wandering around the northern edge of Omaha, in the U.S. state of Nebraska, 23 days after her owner reported her and her canine brother Calypso missing and some 100 miles (160 kilometers) from their home.

Despite frigid conditions, Ivy – a black Labrador Pitbull mix – clung to life! Unfortunately, her brother – a Bernese Mountain Dog – has still not been found.

Photos of the missing dogs were posted on social media in February this year and went viral, prompting many residents in the area to join in the search. As hours rolled into days and days into weeks, the dogs’ owner feared the worst but refused to give up hope.

According to the owner, the two dogs usually got out of their backyard through a loose fence board, but they always came back. This time things were different, and neither dog returned.

Unlike so many other lost pets, Ivy was lucky. She was caught, and her tag dangling from her collar led her back home to Sioux City, Iowa.

No one knows how Ivy got to Omaha, but her rescue came in the nick of time.

She was dangerously underweight when she was found and had lost around 15 pounds (6 kilograms). She had a badly infected wound where her collar had become embedded in her armpit. This was a result of having lost so much weight that Ivy had “stepped through” her collar and trapped her front legs in the collar.

While Ivy’s story had a happy outcome, sadly, the same cannot be said for all lost dogs. Many people actually hinder the capture of lost pets, as was the case of Ivy’s capture.

Ivy’s numerous sightings in the Ponca Hills, especially near the Alpine Inn, drew people to the area, which spooked Ivy, causing her to run. She was finally caught when a homeowner saw her and called The Nebraska Humane Society. Together, the homeowner and the Society were able to lure Ivy into a garage.

Since Ivy’s been home, her recovery is being monitored by a veterinarian. Her wound is healing nicely, and she’s eating prescribed small meals twice a day.

Ivy’s journey follows the similar tale of another dog named Bobbie – a Scottish Collie who was lost in the early 1900s while his owners were visiting family in Wolcott, Indiana. Bobbie covered 2,551 miles (4,105 kilometers) on his own to return home to Silverton, Oregon, United States.