Freddie the donkey was being hacked to death!

In financially-ruined Zimbabwe, the donkeys of this once flourishing country are suffering almost unbelievable cruelty.

On a recent visit to MARES, a donkey sanctuary in Bulawayo, our team found four abused creatures collapsed in their harnesses. The ‘owner’ was slashing one poor donkey with a machete (a long-bladed knife/axe). The donkey’s head was gushing with blood from deep wounds. He was so weak he could barely move, but the man didn’t care. He said he was using the donkey to plough a field; the donkey wasn’t working fast enough, so he was going to make the poor creature suffer.

In a rage the man was HACKING THE DONKEY TO DEATH!

The MARES donkey sanctuary is run by Claire Einhorn – a passionate and caring animal lover – who is saving as many of these gentle and loving animals as she possibly can. MARES arrived at the tragic scene in the nick of time and Claire immediately called police, who discovered the donkeys had been stolen, but by this time the crooks had run away.

Our NFA team helped rescue the donkeys, including the machete victim, whom we renamed Freddie. You will be pleased to know that Freddie is recovering from his wounds and has already found a new home.

But there are thousands of other donkeys who suffer lives of hell in Zimbabwe. They are worked until they are too weak to move and then left to die. I am sure you agree that we have to help. Please, make a donation to Network for Animals today so we can fight to end this horrible situation. 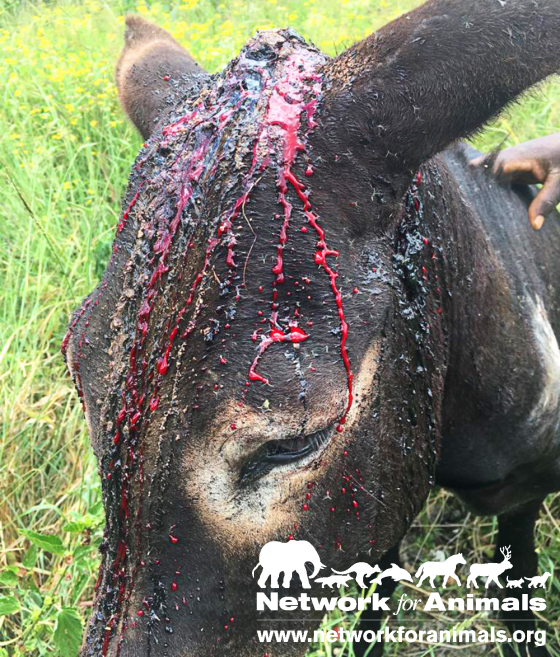 Click here to donate
When they aren’t being hacked the donkeys are literally being worked to death.

Donkeys like Merlin, who had been whipped so severely that he collapsed – his owner abandoned him on the side of the road and left him to die. We were shocked to discover that Merlin’s tail had been destroyed by the cart he was pulling. All the skin on his rear end had been worn away and he was bleeding heavily on his flanks.

We rescued Merlin and provided medical help and food, the gentle creature is making a slow but steady recovery. And, a really nice touch, we’ve even created an artificial tail for him to swat flies away.

There are 48 donkeys at MARES, many rescued from unspeakable cruelty by people who don’t understand that animals feel pain, just like you and NFA. Our team is helping MARES financially and by providing much-needed medicines. If you donate today, we can give even more assistance. The need is so great that any delay means more dead donkeys, so please donate to Network for Animals right now.

P.S. There is a desperate need to teach local people how to care for donkeys and for proper harnesses for donkeys pulling carts. Help us supply modern pain-free donkey harnesses and fund critical outreach programs to educate donkey owners about proper care. Please find it in your heart to help and donate to Network for Animals today.

Freddie the donkey was being hacked to death!