Lynx could return to Britain this year after absence of 1,300 years 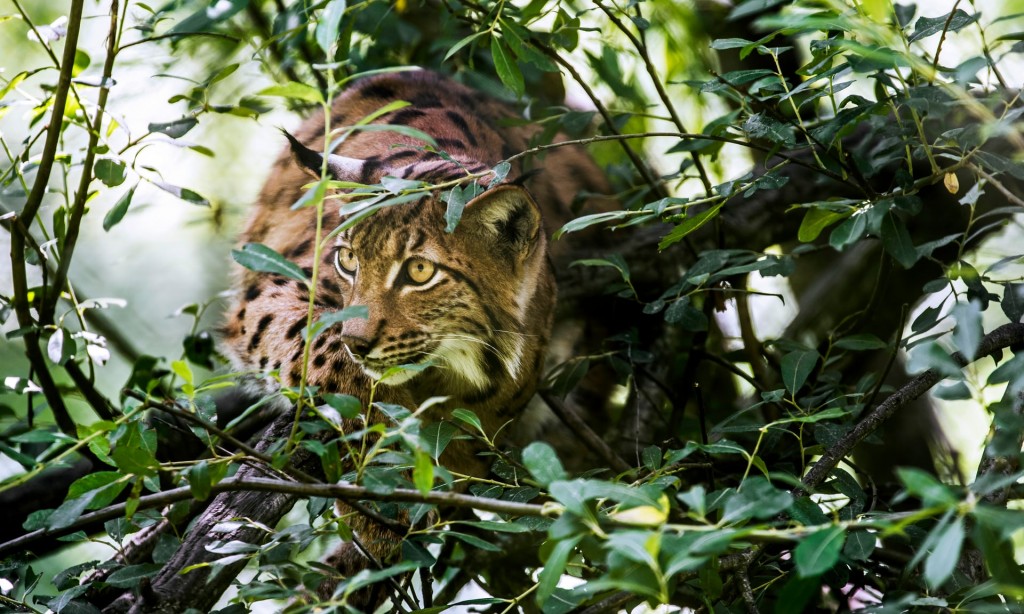 A Eurasian lynx stalking prey in brushwood. The animals were hunted to extinction for their fur in the UK. Photograph: Arterra/UIG via Getty Images

After an absence of 1,300 years, the lynx could be back in UK forests by the end of 2017. The Lynx UK Trust has announced it will apply for a trial reintroduction for six lynx into the Kielder forest, Northumberland, following a two-year consultation process with local stakeholders.

The secretive cat can grow to 1.5m in length and feeds almost exclusively by ambushing deer. Attacks on humans are unknown, but it was hunted to extinction for its fur in the UK. The Kielder forest was chosen by the trust from five possible sites, due to its abundance of deer, large forest area and the absence of major roads.

Sheep farmers and some locals are opposed to the reintroduction, but Dr Paul O’Donoghue, chief scientific advisor to the Lynx UK Trust and expert adviser to the International Union for the Conservation of Nature (IUCN) believes there are good reasons for reintroducing the predator.

“Lynx belong here as much as hedgehogs, badgers, robins, blackbirds – they are an intrinsic part of the UK environment,” he told the Guardian. “There is a moral obligation. We killed every single last one of them for the fur trade, that’s a wrong we have to right.”

Rural communities would also benefit from eco-tourism, O’Donoghue said: “They will generates tens of millions of pounds for struggling rural UK economies. Lynx have already been reintroduced in the Harz mountains in Germany. They have branded the whole area the ‘kingdom of the lynx’. Now it is a thriving ecotourism destination and we thought we could do exactly the same for Kielder,” he said.

Lynx would also boost the natural environment, said O’Donoghue, by reducing the overgrazing of forests by deer, allowing other wildlife to flourish. “We have a massive overpopulation of roe deer in the UK,” he said. “We are one of the most biodiversity poor countries in the world. We need the lynx, more than the lynx needs us.”

The lynx that may be released in Kielder would come from Sweden, where there is a thriving population, and all would have GPS collars reporting their location at all times. “They will be the most studied animals in Britain,” said O’Donoghue, who has also advised on the reintroduction of the great bustard bird in Britain and black rhinos and chimpanzees in Africa. The plan is to release two males and four females, all young adults, as part of the trial is to see if the animals will breed.

Phil Stocker, National Sheep Association chief executive said: “Even if compensation were offered, it will not make sheep mortalities acceptable. I cannot see how distressing attacks caused by a wild animal will be accepted [by the public].

“We are confident that pastoral livestock farming already delivers a highly attractive countryside with environmental, economic and social benefits.” he said. “I cannot accept that lynx could improve or deliver anything more.”

O’Donoghue said: “You will never see a lynx running across an open field chasing down prey – they can’t do it. They are the epitome of a forest specialist – their coat is dappled.” He said research across Europe has shown that wild lynx kill only one sheep every two and half years, while millions of sheep are lost each year in the UK to malnutrition, disease and exposure: “We completely understand the perceived risk of lynx, but it is only perceived.”

The Lynx UK Trust will submit its application for a five-year trial introduction to Natural England (NE) in the coming weeks. “We could have lynx back on the ground in 2017,” said O’Donoghue. “We have taken the concerns of stakeholders and used them to design a project plan which we believe mitigates any risk. At this time we do not see any reasons why a licence would not be forthcoming.”

An NE spokeswoman said it will consider the application under existing laws and the IUCN guidelines for reintroductions, which the Lynx UK Trust says it has followed. “Any decision to grant a licence to reintroduce lynx into the wild in England will be based on the impacts on affected communities, the wider environment and follow international guidelines.”

The trial reintroduction would also need to have an “exit strategy”, NE said. O’Donoghue said the Lynx UK Trust is confident the trial would be success, but if not: “We will be the first people taking those lynx in.”

Beavers, which had been absent since the 16th century, have been reintroduced in England and also in Scotland, where they are now classed as a native species, while the great bustard bird was first reintroduced in 2004.

If lynx are reintroduced, it would be very difficult for eco-tourists to see the mainly nocturnal animals, O’Donoghue said: “Lynx are very secretive and elusive, but that’s completely irrelevant. It’s a chance to walk in a forest where lynx live, a chance to see a lynx track, to see a lynx scratching post. And if you did see a lynx in the wild, it would be the wildlife encounter of a lifetime.”