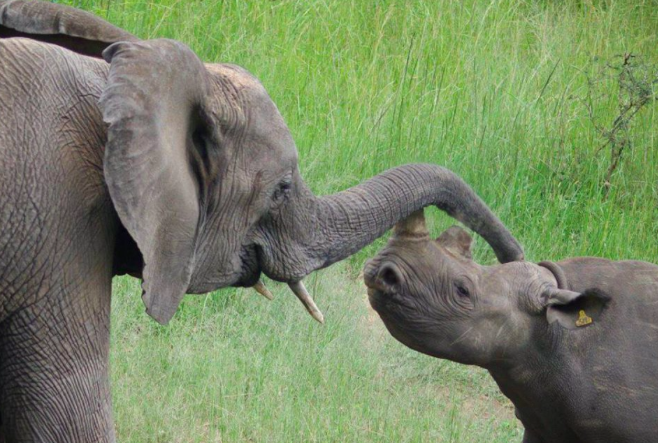 Dinosaurs were wiped from the earth millions of years ago. It is a shocking truth that elephants and rhinos, and many other endangered species are now facing the same fate. Only this time, humans will be to blame. If this happens, we will have to explain to future generations how human greed and ignorance decimated our wildlife, and how those in positions of power stood by and allowed it to happen.

NFA was therefore encouraged to hear UK Secretary of State for the Environment, Andrea Leadsom tell us that fighting the illegal wildlife trade is something she takes very seriously. She explained to NFA:

“Figures suggest a rhino is killed by a poacher every 10 hours – this is totally unacceptable and the UK is determined to do all we can to show global leadership in fighting the illegal wildlife trade. It is, however, a global issue which will only be solved through international cooperation. We need a concerted, strengthened enforcement response to recognise poaching and animal trafficking as a serious, organised crime.”

NFA is in complete agreement with Ms Leadsom that poaching and animal trafficking must be recognised as a serious organised crime. We recently brought you the horrifying story of how worldwide organised crime syndicates are cashing in on the demand for rhino horn, with Vietnam being the biggest consumer of rhino horn products. Many people there erroneously believe that rhino horn has magical health properties, and can even cure cancer.

Given that Vietnam is one of the countries most complicit in the decimation of rhinos, it could be read as a positive sign that they are this year’s hosts of the Conference on Illegal Wildlife Trade. This week also saw Vietnam publicly destroy stocks of confiscated ivory and rhino horn, worth more than seven million dollars on the black market.

Is Vietnam beginning to take the poaching crisis, and the part they play in it more seriously? This is something that will become clear over the next two days, and a delegation from the UK will be there to witness and take part in proceedings.

“I will be leading the UK delegation to the Hanoi Conference on Illegal Wildlife Trade to continue the fight against this hateful trade and to promote a global effort to strengthen law enforcement and reduce the demand for illegal wildlife products.”

CITES is failing our wildlife

NFA has recently spoken out for the need for the the Convention on International Trade in Endangered Species of Wild Fauna and Flora (CITES) to reform, and produced a research document, showing how CITES is failing in its mission, which it says is: “to ensure that international trade in specimens of wild animals and plants does not threaten their survival.”

NFA passed this research document onto the Secretary of State at our meeting, and we hope that it helps to influence UK government decisions on tackling illegal wildlife trade. NFA is especially keen to see the Conservatives stick to their manifesto commitment to press for a total ban on ivory sales which we think is a very important one.

NFA was very disappointed at some of the outcomes of the recent CITES meeting in September. It appears that many of the 182 countries (parties) which make up CITES would rather put profits before the welfare of animals.

A unilateral agreement could not be reached to put African elephants on Appendix 1 of the Convention. Appendix 1 status is for species CITES parties agree are officially threatened with extinction, and all international commercial trade in specimens of these species is prohibited. Shockingly, African elephants were not granted this status, despite the fact they are being killed by ivory poachers at a faster rate than they are being born.

Network for Animals is pleased to hear that Andrea Leadsom wants the UK to “show global leadership” when it comes to fighting the illegal wildlife trade, and it is our sincere hope that the UK delegation, which includes Prince William, can implore Vietnam to address the country’s issues with rhino horn consumption, which is fuelling the rhino poaching crisis.

We also hope that the UK delegation takes this opportunity to lead by example, and impose a total UK ban on all ivory trade, as pledged in the Conservative government’s manifesto.

Take action for elephants today by signing our petition