NFA, NGOs and Top Scientists Urge Theresa May to Stop the Badger Cull 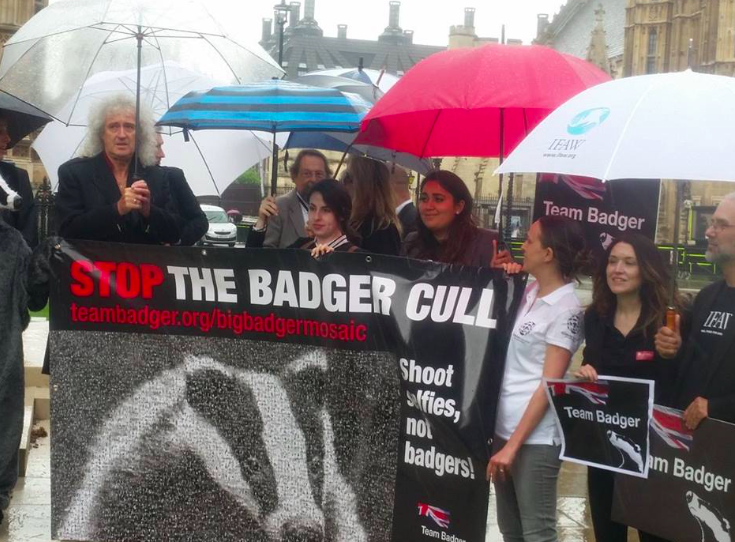 NFA joined forces with other NGOs, and leading scientists in Westminster yesterday and called on the new UK Prime Minister, Theresa May to halt the badger cull.

After a press event outside,  Brian May chaired a meeting in the House of Commons and introduced leading experts in the field of Bovine Tuberculosis (bTB) and badger culling. The meeting and event was attended by the press, and by interested MPs, such as the SNP’s Tommy Sheppard and Paul Monaghan, and Conservative Minister, Tracy Crouch, who is one of many Tories who are against the cull, and hunting with hounds.

“Not a hope in hell of eradicating TB through culling”

Professor John Bourne was part of the 50 million pound RBCT – the largest study ever done of badger culling and bTB. He was scathing towards the government’s culling programme. He described it as a “monstrous” misuse of tax-payer’s money, and said there’s “not a hope in hell” of eradicating bTB through badger culling. Rosie Woodroffe, who was also part of the RBCT told the room that culling may actually increase bTB in cattle.

We also heard from Ranald Munro, who was the chair of the Independent Expert Panel the government set up to feed back on the badger culls. He explained how the culls are failing to meet standards in terms of humaneness and effectiveness. It is his expert opinion that “the culls should have been stopped when we submitted our report.” Unbelievably, that did not happen and instead the government chose to disband the Independent Expert Panel and carry on with their failing and inhumane culling programme. Munro said “there was no great pleasure in Whitehall when we handed in our completely independent report, which was statistically and scientifically rigorous.”

All three experts are adamant that the badger cull should be halted, and that the government’s attention must turn to increased biosecurity on farms, and improved cattle testing measures. Professor Bourne also added that “cattle vaccination has a big part to play”, and he believes that this may become easier now that Britain is on course to leave the EU.

Lord Krebbs, who commissioned the RBCT was also very critical of the government and says:

“Badger culling is a sideshow. The only effective way to stop TB is stopping the spread from cattle to cattle by more testing, and a much better test. The government has not produced  any figures to show the pilot culls in Gloucestershire and Somerset have worked, so how can they justify rolling out the cull to more areas?’

Professor Bourne believes Theresa May, who was not in favour of the cull back in 2011, needs to employ a “TB Supremo” – an expert who could get on with developing a strategic plan to tackle the bTB crisis, which is causing a great deal of distress to many UK farmers. He didn’t mince his words when it came to DEFRA, and said:

“For the life of me, I don’t know who in DEFRA could develop a national strategy. They won’t accept anything other than badgers being the root cause. I don’t get it”.

When questioned by the press on the decisions Chief Veterinary Officer, Nigel Gibbins has made, allowing the culls to continue, Bourne was blunt: “He’s wrong”.

All three experts have written to Theresa May and urged her to halt the cull, rather than let it expand into up to nine counties this year.  In the face of insurmountable evidence, expert opinion, and millions of pounds of public money being wasted on this failing programme at a time of instability in the UK,  can she afford to ignore them?

Are you looking for ways to build a better relationship with your dog? Research has found that the best way to gain your pooch’s love

When it comes to sounds we delight in hearing, again and again, a cat purring contently while he or she gets a much-deserved ear scratch

Several changes to animal cruelty legislation have been proposed in the New South Wales Parliament. Abusers caught committing acts of cruelty to animals will now