The Greek dogs that grieve for their lost families… 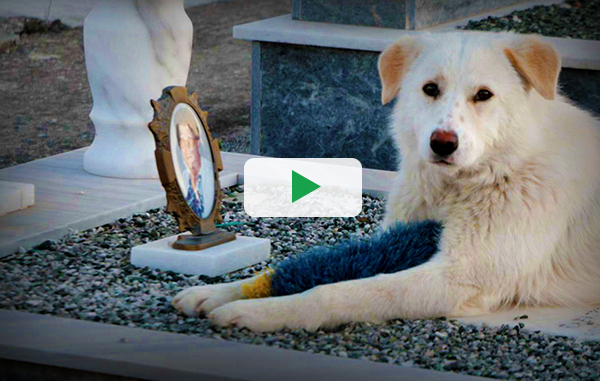 Every dog lover knows that our animals love us devotedly and wholeheartedly… and from the little town of Arta, in north west Greece comes yet more proof.

…that’s where his dog Whitey now lives, sleeping on her dead owner’s grave.

Townsfolk say Georgios adopted Whitey when she was a puppy and they became inseparable in the year before Georgios died. Even death could not end the love affair because immediately after the burial, Whitey went and lay down on her master’s grave and refused to move.

A volunteer from a local volunteer animal welfare organisation took Whitey home but she escaped and returned to the tomb. In the beginning she was very depressed, did not eat for days and barely moved from her master’s grave.

But now she seems to have adopted all the departed souls in the cemetery and cheerfully bounds around, always returning to her master’s grave.

Whitey is being fed twice a day by volunteers and Network for Animals will pay for her to be spayed.

She needs to find new family fast, because Greek Easter is approaching and a lot of people will go to the cemetery, some of whom might see her as an unholy intruder, rather than an expression of the love between dogs and humans.

Network for Animals is helping Whitey now and will do our best to make sure her story has a happy ending, but there are literally hundreds of thousands of dogs in Greece that need help: the BBC estimates there are ONE MILLION street dogs in Greece. They are of victims of the crushing financial crisis that has seen Greece brought to its knees and caused enormous suffering to animals.

As dog lovers, we can barely allow ourselves to think of one million dogs suffering. That’s why we need your help to increase our help to dogs in distress in Greece.

It’s a massive task and sometimes a sad one when we see how badly some people treat animals, but somehow when you hear a story like Whitey’s it all becomes worthwhile because it’s another example of just how much dogs love humans. All we can do is to salute their devotion and repay them with love and help where we can.

If you can possibly do so, please donate today so we can be there on the front line helping the million dogs in distress in Greece.