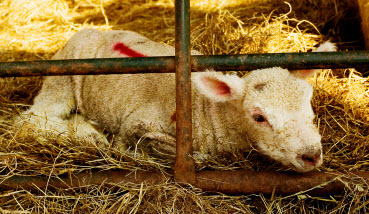 In September, we gave our supporters an update on the shocking Meat Animal Research Centre (MARC)  in Nebraska. A story we originally brought to your attention in January.

MARC  has operated in collaboration with the University of Nebraska- Lincoln  since its founding by Congress in the 1960s and has a $22.7 million taxpayer-funded budget.  Its horrifying research experiments on meat-producing animals were exposed by Pulitzer Prize winner, Michael Moss. Experiments so horrifying that even the meat industry itself is condemning the actions of the centre, and the inhumane treatment of the farm animals under their care.

In one experiment, the foetuses of pigs were “manually crushed” in order to study the effect of empty uterine space on birth intervals in pigs. And in his shocking  full length investigation , Michael Moss described workers pushing animals, or watching them fall, as the workers stood by and enjoyed donuts. One poor cow had her head held in a cage-like device for hours and was mounted by a bull  until her bones were broken, her insides were torn apart, and she died.

Unbelievably, as U.S law stands today, the centre is  abiding by rules on animal welfare, precisely because there are no laws in place to protect farm animals in this situation. The Animal Welfare Act (AWA) specifically exempts farm animals “used or intended for use for improving animal nutrition, breeding, management, or production efficiency, or for improving the quality of food or fiber.” This legal loophole allows MARC to get away with these horrific and inhume research practices.

Network for Animals communicated for months with numerous officials at the Department of Agriculture and sent one of our representatives to Washington D.C.  Over 25,000 of our supporters signed our petition to Secretary Vilsack.

In a formal written response, Network for Animals was assured that “a thorough review of animal handling protocols and procedures” was underway conducted by an “independent panel”,  and that the USDA Office of the Inspector General is conducting “its own investigation into the allegations”

Shortly afterwards, the USDA announced a ban on new animal research projects conducted at MARC, until new procedures ensuring greater accountability for animal welfare were fully implemented.  A few months later, in June this year, John Pollak, director of MARC, said the centre had addressed seven of the recommendations for animal care and well-being made in a report by a five-member panel that toured the center in March. However it is important to note that publication of all research papers from MARC were immediately suspended by the nonprofit organization that oversees the Journal of Animal Science, a peer-reviewed scientific journal. To be published, the journal requires all research done after 2003 be approved by an animal care committee that meets certain guidelines, which the centre’s committee did not. MARC may be operating within the realms of the law but it has clearly been noted that they have a long way to go when it comes to animal welfare.

NFA is still not satisfied that the animals at MARC are being treated with due care and attention and with the help of our supporters we will fight to have it shut down. We also won’t rest until the legal loophole which allows farm animals used in research to be exempt from the Animal Welfare Act, is closed.

We are pleased to acknowledge the proposal of  an Animal Welfare in Agriculture Research Endeavors (AWARE) Act, which has been put forward in the House of Representatives. If passed, this would protect farm animals in research centres like MARC from being treated in such cruel and inhumane ways. But since this bill was first introduced on 27 February 2015, no progress has been made.