We recently told you of our plan to help street cats who live on the isolated Greek island of Ithaca. Because of COVID-19, no vet has visited the island for two years to conduct a spay and neuter program. Sick cats and a population explosion are inevitable. We vowed, not just to help, but, if possible, to sterilize all Ithaca’s street cats.

To sterilize an entire island’s population of street cats is quite a task. But thankfully, Ithaca is small, with only 3,000 people living on the rugged island.

Usually, this small population relies on tourism for an income. And in the summertime, restaurant diners and visiting yachtsmen feed the many cats scraps. But with COVID restrictions, Ithaca has hardly seen a tourist. If it wasn’t for Network for Animals (NFA), providing food for them since the pandemic started, many would not have survived.

But now, with no spay and neuter program, a population crisis is looming. To solve the problem, we struck a deal with a vet from the neighboring island of Kefalonia who agreed to help if we could find the money to pay him. Thanks to our supporters, we managed to raise enough to pay for the vet’s ferry and to conduct a spay and neuter program for as many street cats as he could in one weekend. While he was there, he also treated sick cats.

The program was a huge success. When the vet sailed into port, we had 20 cats waiting for him. All the cats were given a medical, and by the end of the weekend, 48 cats had been sterilized while many others were given a thorough medical. One poor kitten was so sick that she was shaking uncontrollably – a terrible warning of the suffering these cats would endure had it not been for the help our supporters enabled us to give.

The job is not over yet, but the vet has agreed to visit the island again soon, and we have paid him to sterilize 100 cats. If our supporters donate enough money, we will continue until we have sterilized every street cat on the island, of which it’s estimated there are 300.

Three hundred cats may not sound like a lot, but a single female cat can produce up to 12 kittens a year. To put that into context, one pair of cats and their offspring could produce 420,000 cats over their lifetime. Theoretically, if 150 of our 300 cats were female and were left to breed for the rest of their lives, they and their offspring could produce an astounding 63,000,000 kittens. But this would never be allowed to happen in Ithaca as the usual solution to their kitten problem is to kill them. We are opposed to killing animals as a solution, which is why we will do everything we can to make this program work.

Incidentally, we are working to do the same thing on the island of Lamu in Kenya and have been asked to help on another isolated island in Greece which is also suffering from the lack of tourists. 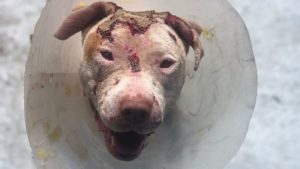 Phoenix The Dog Has Risen From The Ashes!

A few weeks ago, we rescued Phoenix, a poor dog who’d fallen victim to maddened rioters in Atlantis, a slum in Cape Town, South African.