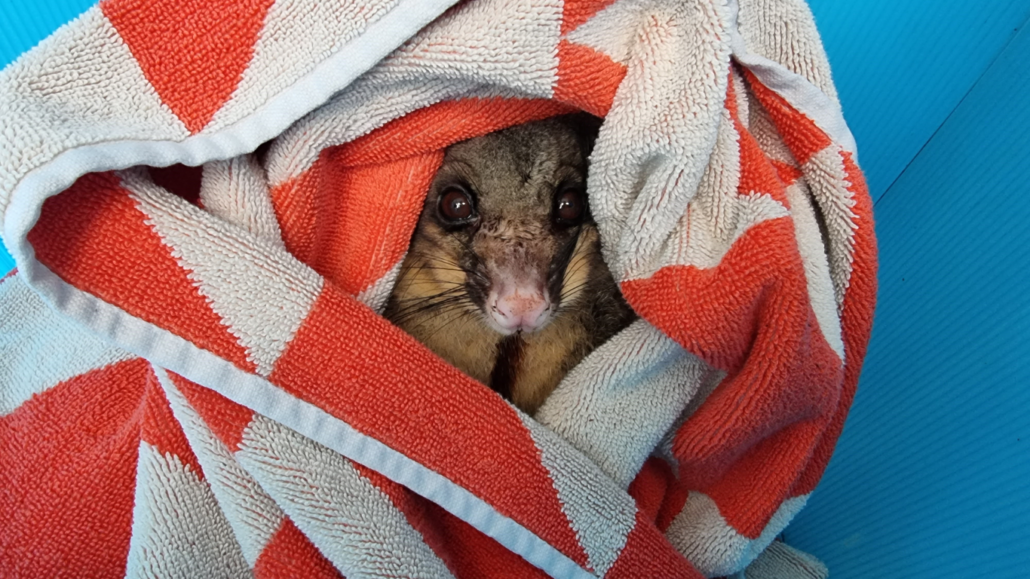 It’s been a busy month of lifesaving love, hardworking advocacy and tireless rescue here at Network for Animals. And none of it could have happened without you. From a mama donkey caught by a vicious bear trap to a tiny puppy who was being baked alive, here’s a glimpse at how your kind donations helped animals around the world this month:

Remember Alfie, the poor donkey whose leg was severed by a bear trap’s steel jaws? Our partner in Israel, the Starting Over Sanctuary, says other donkeys in the area have suffered the same fate. We are committed to changing this dreadful situation! As for sweet Alfie, thanks to you, she got the emergency medical attention she needed. That’s when they discovered Alfie is pregnant. With your help, she’s enjoying the best maternity care while she waits for her prosthesis, and the arrival of her newborn foal (Name suggestions are very welcome!). Alfie and her unborn foal would certainly not have made it without you! 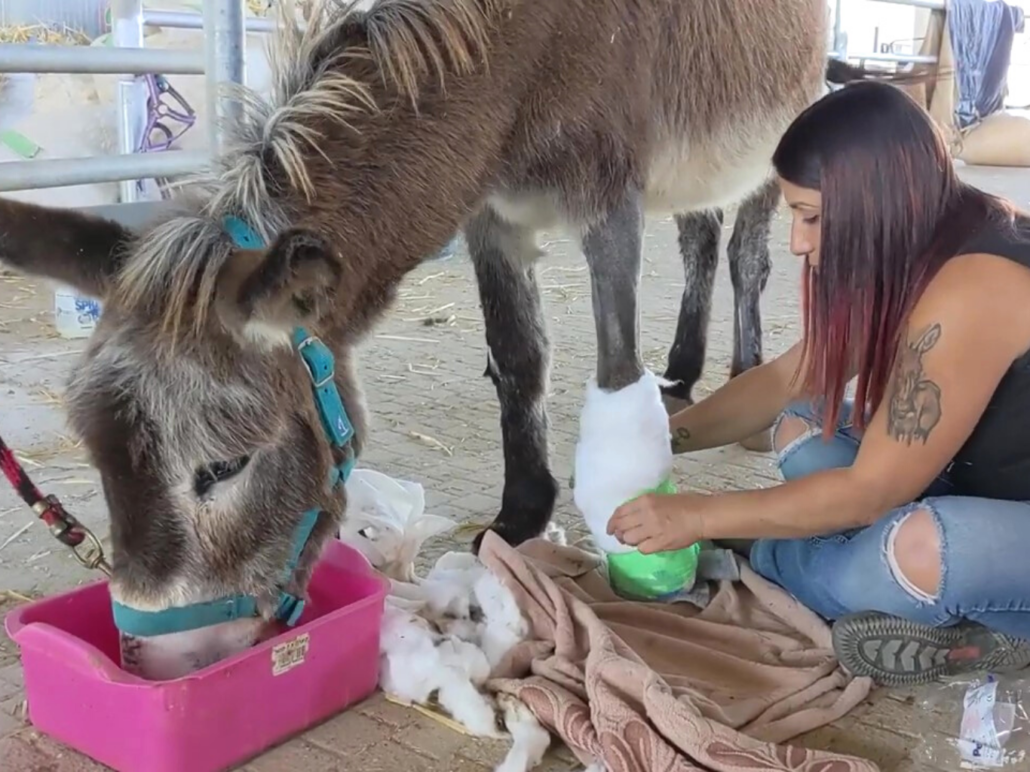 James’s family moved away and simply left without him. Then, in return for his “crime” of being abandoned, and as he struggled not to starve on the streets, this gentle soul was intentionally beaten nearly blind, had his jaw and other bones shattered and his battered lungs filled with fluid. He’s been terribly traumatized and is still in critical care, but your support is staying by his side night and day. Thanks to you, we will not give up on James, or ANY animal suffering cruelty and abuse, and we will not rest until their abusers are brought to justice! Please keep James in your thoughts and in your heart – he’s so brave and is trying so hard to get better. 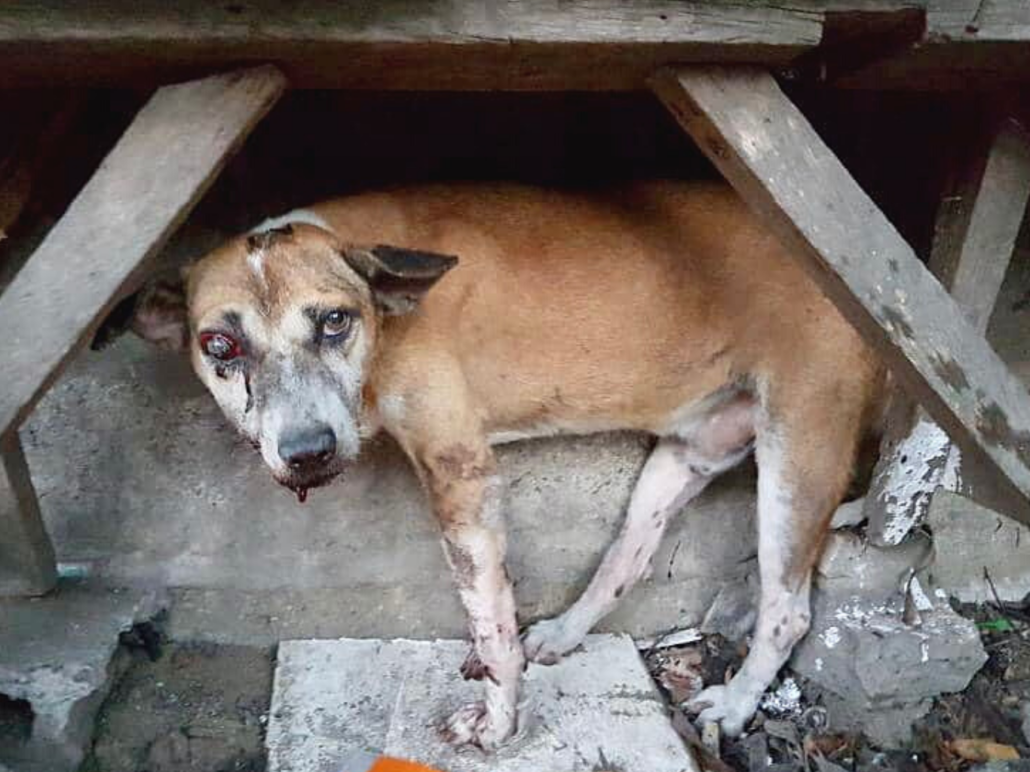 We rushed into action when we learned that the Australian state of New South Wales was experiencing the worst flooding in decades. Entire animal shelters were being evacuated, and wildlife was in dire need of rescue. Roads, trees, and even houses were completely submerged. We partnered with a pivotal and hardworking organization in the State called WIRES (the Wildlife Information, Rescue, and Education Service), Australia’s largest wildlife rescue organization. With your support, we were able to save hundreds of animals trapped by torrential rains and rising floodwaters by providing WIRES with funds to donate vital supplies for smaller rescue organizations and animal carers around the region and to support their highly specialized Emergency Response Team. 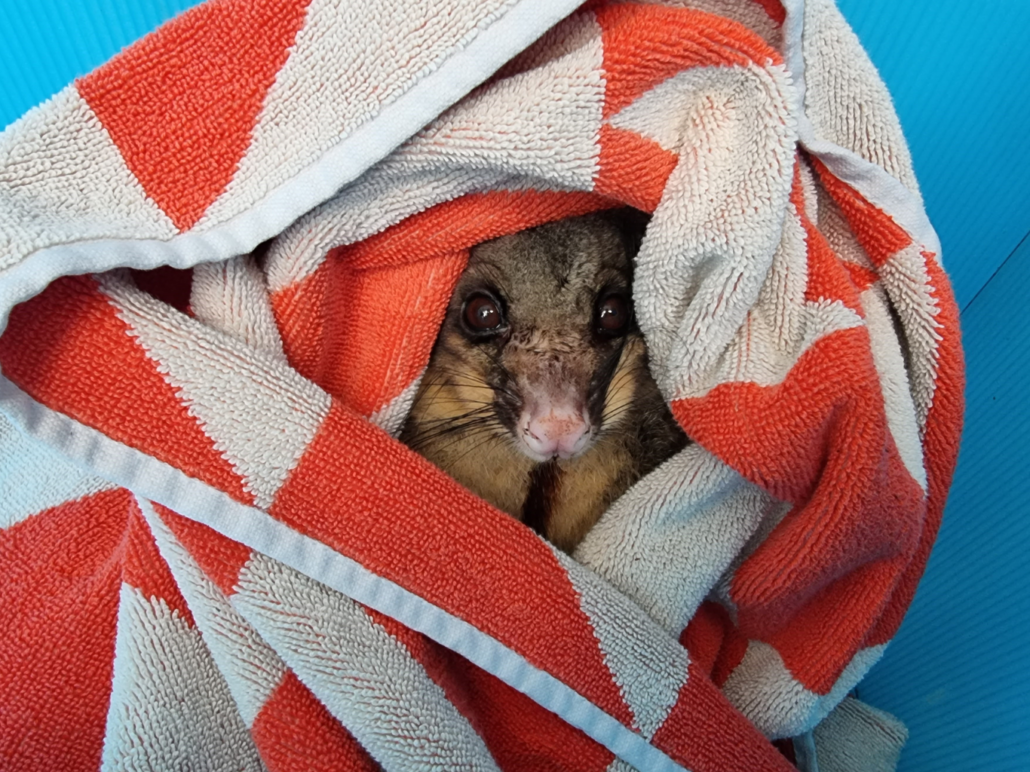 Yet another donkey tale this month that would have had a disastrous ending if it weren’t for your compassion. On a tiny island called Lamu off the coast of Kenya, thousands of donkeys are being forced to scavenge off garbage heaps. What’s worse, these starving creatures also suffer terrible abuse. When our partner, the KSPCA (the Kenyan Society for the Prevention of Cruelty to Animals), arrived, this lone donkey haven had just one bag of food left. With sick donkeys pouring in, we didn’t hesitate – thanks to you, we provided the sanctuary with a two-month supply of food, and more is on the way, plus medicines! 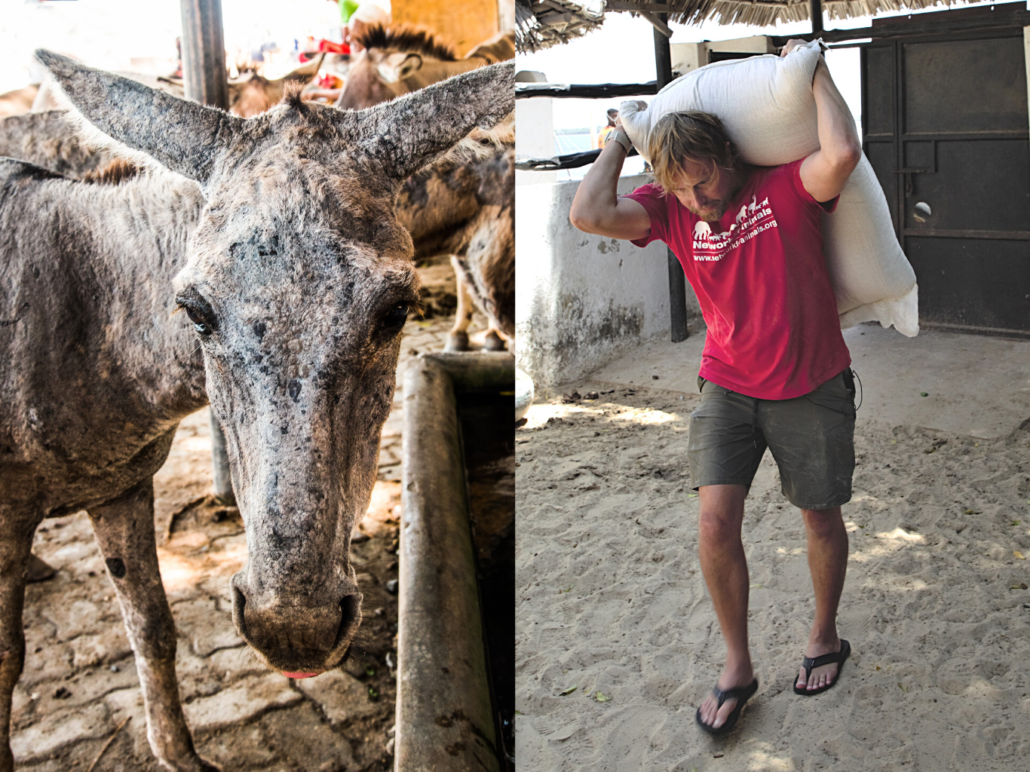 We are pleased to share that Wookiee, the dog who had been tormented for at least four years by a matted prison of fur, has been adopted! The veterinary assistant that helped treat him fell in love with this sweet boy and couldn’t resist but to adopt him!

When we received a desperate call from our partner on the ground, Fallen Angels in Cape Town, we were stunned by what we found. Lying in front of us was a mess of urine-and-feces-soaked fur, writhing with lice and shaking in terror. Then we saw a small, frightened eye! It fills us with anger that anyone could let a dog suffer this way! We rushed Wookiee to the vet where 22 pounds (10 kilos) of fur was carefully shaved and cut from his tiny 16.8-pound (7.6 kilograms) body. Thankfully though, Wookiee has friends like you. 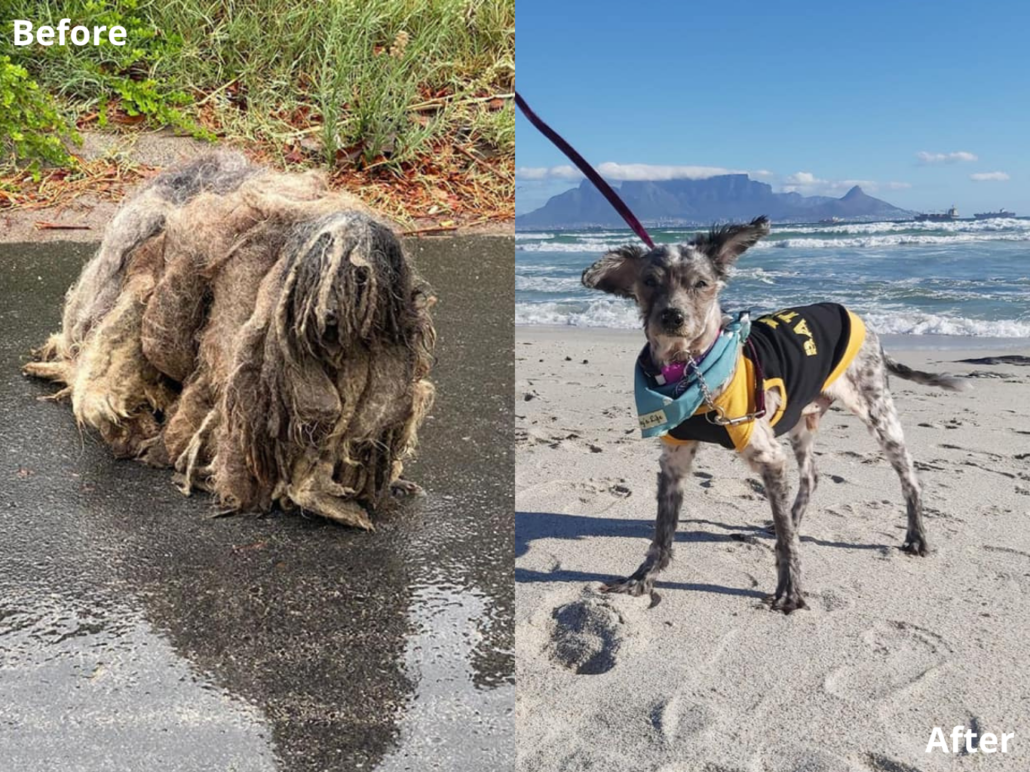 This second story from South Africa comes to you, thanks to our incredible local partner, Fur-Get-Me-Knot. Because of your support, we are helping them bring desperately needed food and water to dogs who live their entire lives at the end of chains, straining for love – and bringing an urgently needed message of proper care to their owners. These faithful watchdogs protect their people in South African townships that are often lawless, but in return are kept chained, hungry and thirsty. This MUST change, and the education we are providing with your help is vital. Just as vital are the food, water and regular visits you fund: Fur-Get-Me-Knot told us that you are the only hope for the dogs, and they are beyond grateful. 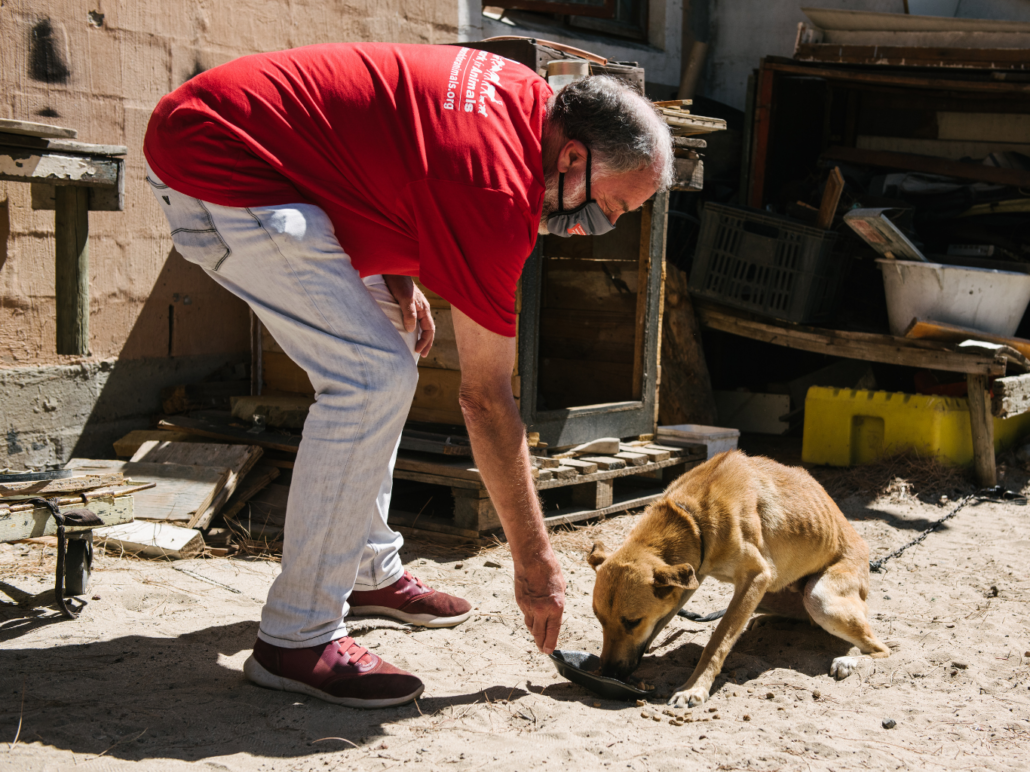 Last but not least from South Africa, is a much-awaited update on Pawcasso, the eight-month-old street pup who was thrown away and left to die in the harsh African sun. When we found him, he was so badly sunburnt and had such heartbreaking mange that his skin was blistered, raw, cracked and bleeding. Having lost the will to live, the poor boy crawled into an empty box to die. Your loving donations rescued Pawcasso and saved his life! From our friends at Fallen Angels, “He loves having cream rubbed on every evening, then snuggles up in his blanket. What a superstar!” 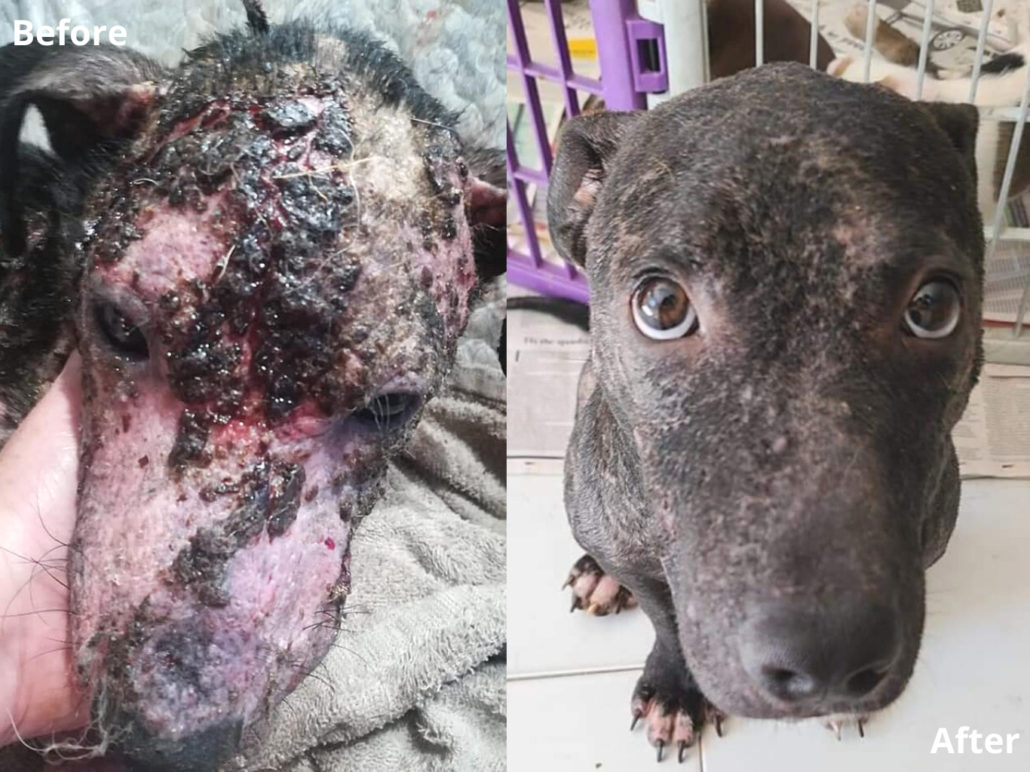 When faced with tragic situations involving animals, it would be easy to say the problem is just too big. Not Network for Animals! We fight for every single animal’s life. Thank you again for your generous donations which have made these life-saving campaigns possible.